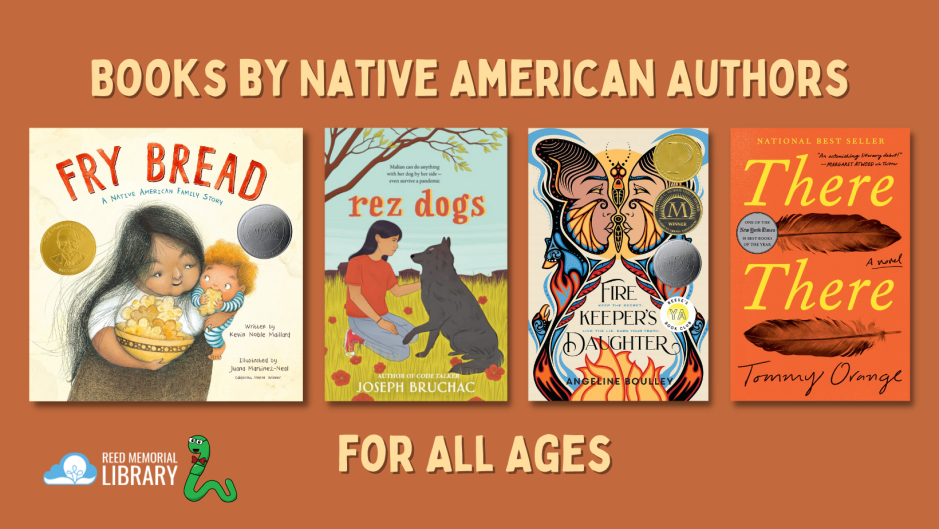 November is Native American Heritage Month, so we have put together a list of books by Native American authors for you to read all year round. The books here range from picture books to adult and non-fiction to fiction!

Summary from our catalog: Wampanoag children listen as their grandmother tells them the story about how Weeâchumun (the wise Corn) asked local Native Americans to show the Pilgrims how to grow food to yield a good harvest–Keepunumuk–in 1621.

We Are Water Protectors by Carole Lindstrom, illustrated by Michaela Goade

Summary from our catalog: Water is the first medicine. It affects and connects us all… When a black snake threatens to destroy the Earth and poison her people’s water, one young water protector takes a stand to defend Earth’s most sacred resource. Inspired by the many indigenous-led movements across North America, this bold and lyrical picture book issues an urgent rallying cry to safeguard the Earth’s water from harm and corruption.

Summary from our catalog: Using illustrations that show the diversity in Native America and spare poetic text that emphasizes fry bread in terms of provenance, this volume tells the story of a post-colonial food that is a shared tradition for Native American families all across the North American continent. Includes a recipe and an extensive author note that delves into the social ways, foodways, and politics of America’s 573 recognized tribes.

Summary from our catalog: Nadia Sammurtok lovingly invites the reader into the amautik–the pouch in the back of a mother’s parka used to carry a child–to experience everything through the eyes of the baby nestled inside, from the cloudlike softness of the pouch to the glistening sound of Anaana’s laughter.

I Sang You Down From the Stars by Tasha Spillett-Sumner, illustrated by Michaela Goade

Summary from our catalog: A Native American woman describes how she loved her child before it was born and, throughout her pregnancy, gathered a bundle of gifts to welcome the newborn.

Summary from our catalog: Edited by award-winning and bestselling author Cynthia Leitich Smith, this collection of intersecting stories by both new and veteran Native writers bursts with hope, joy, resilience, the strength of community, and Native pride.

Summary from our catalog: Twelve-year-old Malian lives with her grandparents on a Wabanaki reservation during the COVID-19 pandemic.

The Sea in Winter by Christine Day

Summary from our catalog: After an injury sidelines her dreams of becoming a ballet star, Maisie is not excited for her blended family’s midwinter road trip along the coast, near the Makah community where her mother grew up.

Healer of the Water Monster by Brian Young

Summary from our catalog: When Nathan goes to visit his grandma, Nali, at her mobile summer home on the Navajo reservation, he knows he’s in for a pretty uneventful summer, with no electricity or cell service. Still, he loves spending time with Nali and with his uncle Jet, though it’s clear when Jet arrives that he brings his problems with him. One night, while lost in the nearby desert, Nathan finds someone extraordinary: a Holy Being from the Navajo Creation Story–a Water Monster–in need of help. Now Nathan must summon all his courage to save his new friend. With the help of other Navajo Holy Beings, Nathan is determined to save the Water Monster, and to support Uncle Jet in healing from his own pain.

Summary from our catalog: Brothers Pat and Lolly Vegas were talented Native American rock musicians that took the 1960s Sunset Strip by storm. They influenced The Doors and jammed with Jimmy Hendrix before he was “Jimi,” and the idea of a band made up of all Native Americans soon followed. Determined to control their creative vision and maintain their cultural identity, they eventually signed a deal with Epic Records in 1969. But as the American Indian Movement gained momentum the band took a stand, choosing pride in their ancestry over continued commercial reward. Created in cooperation of the Vegas family, authors Christian Staebler and Sonia Paoloni with artist Thibault Balahy take painstaking steps to ensure the historical accuracy of this important and often overlooked story of America’s past. Part biography and part research journalism, Redbone provides a voice to a people long neglected in American history.

Summary from our catalog: Imagine an America very similar to our own. It’s got homework, best friends, and pistachio ice cream. There are some differences. This America has been shaped dramatically by the magic, monsters, knowledge, and legends of its peoples, those Indigenous and those not. Some of these forces are charmingly everyday, like the ability to make an orb of light appear or travel across the world through rings of fungi. But other forces are less charming and should never see the light of day. Seventeen-year-old Elatsoe (“Ellie” for short) lives in this slightly stranger America. She can raise the ghosts of dead animals, a skill passed down through generations of her Lipan Apache family. Her beloved cousin has just been murdered, in a town that wants no prying eyes. But she is going to do more than pry. The picture-perfect façade of Willowbee masks gruesome secrets, and she will rely on her wits, skills, and friends to tear off the mask and protect her family.

Summary from our catalog: Daunis, who is part Ojibwe, defers attending the University of Michigan to care for her mother and reluctantly becomes involved in the investigation of a series of drug-related deaths.

The Summer of Bitter and Sweet by Jen Ferguson

Summary from our catalog: Lou has enough confusion in front of her this summer. She’ll be working in her family’s ice-cream shack with…her former best friend, King, who is back in their Canadian prairie town after disappearing three years ago…But when she gets a letter from her biological father…Lou immediately knows that she cannot meet him…While King’s friendship makes Lou feel safer…when her family’s business comes under threat, she soon realizes that she can’t ignore her father forever.

Summary from our catalog: Sasha taqwšeblu LaPointe, a Coast Salish indigenous woman, has always longed for a sense of home. As a child her family moved around frequently, often staying in barely habitable church attics and trailers, dangerous places for young Sasha. As an adolescent determined to escape the poverty and abuse of her childhood in order to build a better future for herself and her people, Sasha throws herself headlong into the world, with little more to guide her than a passion for the thriving punk scene of the Pacific Northwest and a desire to live up to the responsibility of being the namesake of her beloved great-grandmother, a linguist who helped preserve her indigineous language of Lushootseed and one in a long line of powerful ancestors. Exploring what it means to be vulnerable in love and in art while offering an unblinking reckoning with personal traumas as well as the collective historical traumas of colonialism and genocide that continue to haunt native peoples, Red Paint is an intersectional autobiography of lineage, resilience and above all the ability to heal that chronicles Sasha’s struggles navigating a collapsing marriage while answering the call to greater purpose. Set against a backdrop of tour vans and the breathtaking beauty of Coast Salish ancestral land and imbued with the universal spirit of punk–an ethos that challenges us to reclaim what’s rightfully ours: our histories, our power, our traditions, and our truths-Red Paint is ultimately a story of the ways we learn to heal while fighting for our right to a place to call home.

The Night Watchman by Louise Erdrich

Summary from our catalog: It is 1953. Thomas Wazhushk is the night watchman at the first factory to open near the Turtle Mountain Reservation in rural North Dakota. He is also a prominent Chippewa Council member, trying to understand a new bill that is soon to be put before Congress. The US Government calls it an ’emancipation’ bill; but it isn’t about freedom – it threatens the rights of Native Americans to their land, their very identity. How can he fight this betrayal? Unlike most of the girls on the reservation, Pixie – ‘Patrice’ – Paranteau has no desire to wear herself down on a husband and kids. She works at the factory, earning barely enough to support her mother and brother, let alone her alcoholic father who sometimes returns home to bully her for money. But Patrice needs every penny to get if she’s ever going to get to Minnesota to find her missing sister Vera.

The Removed by Brandon Hobson

Summary from our catalog: Steeped in Cherokee myths and history, a novel about a fractured family reckoning with the tragic death of their son long ago–from National Book Award finalist Brandon Hobson.

There There by Tommy Orange

Summary from our catalog: Twelve Native Americans came to the Big Oakland Powwow for different reasons. Jacquie Red Feather is newly sober and trying to make it back to the family she left behind in shame. Dene Oxedrene is pulling his life together after his uncle’s death and has come to work the powwow and to honor his uncle’s memory. Edwin Frank has come to find his true father. Bobby Big Medicine has come to drum the Grand Entry. Opal Viola Victoria Bear Shield has come to watch her nephew Orvil Red Feather; Orvil has taught himself Indian dance through YouTube videos, and he has come to the powwow to dance in public for the very first time. Tony Loneman is a young Native American boy whose future seems destined to be as bleak as his past, and he has come to the Powwow with darker intentions–intentions that will destroy the lives of everyone in his path. Tommy Orange delivers a wondrous and shattering portrait of an America few of us have ever seen. A multi-generational, relentlessly paced story about violence and recovery, hope and loss, identity and power, dislocation and communion, and the beauty and despair woven into the history of a nation and its people.